Between 1-30 November 2019, three lawyers were sentenced, six lawyers were detained and seventeen lawyers were subjected to investigations or interdiction orders which preventing them from representing certain individuals.

27 November 2019 | Ankara |Fatih Kanat who is the chair of Ankara branch of the Human Rights Association and lawyer Kemal Akalin have been detained with a police raid. They are still under police custody.

The Chair of Ankara branch of the Human Rights Association, Fatih Kanat and lawyer Kemal Akalin have been detained with a police raid. 8 other individuals, the members of SES and KESK (workers union) were detained. @UNIndepJudges @UN_SPExperts @NachoSAmor pic.twitter.com/sOfIKDa4FY

24-26 November 2019 | Istanbul – Kocaeli |Lawyers Zakire Dündar and Yüksel Genç were detained in Kocaeli within the scope of police operation against local Kurdish politicians. They are still under police custody.

Lawyer Yaprak Turkmen was detained on 24 November in Istanbul. She was released after 4-day police custody.

Lawyer Yaprak Türkmen were detained on 24 Nov in Istanbul. She has been under police custody since then. She was detained during a police intervention into a peaceful protest on the state of emergency dismissal. pic.twitter.com/kKM54CNaYf

21 November 2019 | Adana | The Adana Court sentenced former chair of Adana Bar Association, Mengücek Gazi Çıtırık, along with 58 individuals, to 5 months in jail due to their press statement denouncing a terrorist attack against pro-Kurdish Party (HDP)’s rally in 2016. The sentence given on grounds of violation of the Law on Meetings and Demonstrations. The Court converted the jail term to a pecuniary penalty amounts of 3000 -TL.

Adana Court sentenced former chair of Adana Bar Association, Mengücek Gazi Çıtırık, along with 58 individuals, to 5 months in jail due to their press statement denouncing a terrorist attack against pro-Kurdish Party (HDP)'s rally in 2016. https://t.co/9ahkfQVNj0 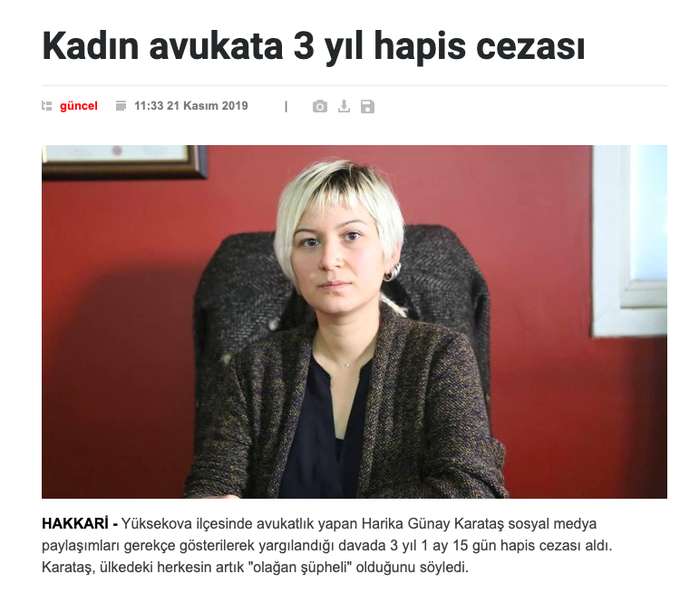 21 November 2019 | Balikesir | On 20 November 2019, lawyer Fuat Sengul who is the member of Izmir Bar Association and Libertarian Lawyers Association (@ohdgenelmerkez) was detained with a police raid and taken to the province of Balikesir from Izmir for interrogation.

On 21 November 2019, Mr Sengul was remanded to pretrial detention by the Balikesir Criminal Peace Judgeship.

In the course of the last three years, several rights violations has been reported from the prisons in Balikesir.

Lawyer Fuat Sengul who is the member of Izmir Bar Association and Libertarian Lawyers Association (@ohdgenelmerkez) was detained with a police raid and taken to the province of Balikesir from Izmir. https://t.co/stk6MTrL6g

18 November 2019 | Gaziantep – Mersin | Eleven lawyers who are the members of the Libertarian Lawyers Association were subjected to intimidation by a deputy from the Turkey’s National Movement Party. Subsequently, these lawyers were banned for one year from representing fifty-seven individuals including local HDP politicians who were detained on 14 November 2019. This interdiction order means that these lawyers are subject to an investigation.

Emergency Decree No. 667 and Law no. 6749 expanded prosecutors’ authority to request to ban lawyers. The concerned provision as follows:

Within the scope of the investigations performed, the defence counsel selected under Article 149 of the Criminal Procedure Code no. 5271 of 4 December 2004 or assigned under Article 150 thereof may be banned from taking on his/her duty if an investigation or a prosecution is being carried out in respect of him/her due to the offences enumerated in this Article. The Criminal Peace Judgeship shall render a decision on the public prosecutor’s request for a ban without any delay. Decision on banning shall be immediately served on the suspect and the relevant Bar Presidency with a view to assigning a new counsel.

Today, another member of the Libertarian Lawyers Association, Fuat Sengul, was detained by the police with a morning raid. @IzmirOhd @izmir_barosuhttps://t.co/Lez121ztLC

6 November 2019 | Istanbul | Istanbul Heavy Penal Court has sentenced lawyer Kemal Ucar (@crkml) to seven and half years jail term for abetting to an armed terrorist organisation. Mr Ucar was representing some military officers who were on trial for their alleged participation to 2016’s coup attempt. There are very strong indications that Mr Ucar was targeted only because of identity of his clients.

November 2019 | Ankara| It was reported by Turkish and international media that a Turkish lawyer, Yilmaz Sunar who had been hired by the German Embassy in Ankara was detained by Turkish authorities on espionage charges.

Pro-government daily, Yenisafak claimed that Mr Sunar also had been representing embassies of Norway, Sweden and Netherlands in Ankara. Pro-government A-Haber labeled Mr Sunar as ‘traitor’ and “Feto’s Spy Lawyer’ though he was working under a legal contract as a legal counsel.

A Turkish lawyer to the Germany's Ankara Embassy has been detained by the Turkish police for espionage against Turkey. @Anwaltverein @rav_gs @UNIndepJudges https://t.co/JR4LCFQ2Oh

The Turkish Constitutional Court rendered another controversial judgment on a provision which offers a wide range of impunity to civil servants for their actions performed during the state of emergency.

Having declared the state of emergency, the Cabinet of Ministers enacted Decree Law no. 667 (dated 23 July, 2016) of which Art. 9 reads as follows:

ARTICLE 9 – (1) Legal, administrative, financial and criminal liabilities shall not arise in respect of the persons who have adopted decisions and fulfil their duties within the scope of this Decree Law.

The Main Opposition Party, CHP, lodged an action for annulment with the TCC against this provision, however, the TCC dismissed this request saying it did not have jurisdiction over the Emergency Decrees.

Subsequently, the Decree Law no. 667 was approved by the Parliament with the Law no. 6749 and acquired the status of ordinary law. Following this legislative action, the Main Opposition Party brought an action for annulment against the Law no. 6749. However, the TCC, having examined the merits, once again dismissed the action for annulment on grounds of such impunity clauses were necessary to encourage the public servants so they could perform their duties effectively to overcome the threats arose out of the state of emergency. (File No: 2016/2025, Decision No: 2016/93)

OTHER NEWS FROM THE JUDICIARY

20 November 2019 | Turkey has investigated 559,064 people for alleged links to the Gülen movement, which is accused of masterminding a 2016 coup attempt despite its strong denial of any involvement, as well as detaining 261,700 suspects over Gülen ties and remanding 91,287 to pretrial detention since the 2016’s coup attempt, the interior minister told during a meeting in the Turkish Parliament.

On 15 July, 2019, Celal Uzunkaya who is then general director of the Turkey’s General Directorate of Security (National Police) said that 540,000 individuals have been detained on grounds of their alleged cohesion or connection with the Gulen Movement / Structure which was outlawed by the Turkish Government after the coup attempt.

‹ A Turkish lawyer who is legal counsel to foreign embassies in Ankara was detained
Report on criminal liabilities with regard to torture incident took place in Ankara Police Headquarters between 20 and 31 May 2019. ›

The Arrested Lawyers Initiative (TALI) a Brussels-based rights group consists of lawyers making advocacy to ensure lawyers and human rights defenders perform their duty without fear of intimidation, reprisal and judicial harassment. TALI is a member of the International Observatory for Lawyers.
Contact: general@arrestedlawyers.org