The Post Coup Purge Evolved to The Humanitarian Crisis

Under the state of emergency rule, 168K people detained, 57K were arrested, 1 CHP and 13 Kurdish deputies  including co-chairs of HDP were arrested.

Enis Berberoglu sentenced to 25 years and got arrested.

Pursuant to article 5 of European Convention of Human Rights “Everyone has the right to liberty and security of person.”

According to Ministry of Justice Bekir Bozdag, 168K people are being prosecuted, 57K people got arrested (51K are still under arrest), 48K people are under probation, 8K people are wanted within the scope of post coup investigations.

This large scale numbers indicate that Turkey’s Humanitarian Crisis threatens “the right to liberty and security” of all dissidents who are probably %48 of population.

Also there is a wide spread torture and ill-treatment reported by Human Rights Watch and Amnesty International. The direr fact is that law enforcement officers have impunity for all type of offences under The Emergency Decree 667. 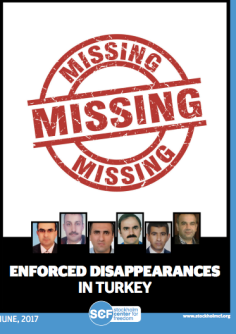 Another threat – that is, for foreigners visiting Turkey – is being held captive to exchange with people sought by the Turkish government.

Erdogan asks Germany and US to deport the Gulenists to Turkey in exchange of release of their citizens.

#Erdogan openly admits he holds foreign nationals as hostages in #Turkey jails to make a bargain for the extradition of his critics abroad. pic.twitter.com/b8PZr8TjNe

So, arbitrary arrest, torture, enforced disappearance, to be hold as captive for exchange are imminent danger that threats the large group of people.

2. THE THREAT AGAINST WELL BEING OF THE LARGE GROUP OF PEOPLE

b) shut down 3520 entities including universities, private schools, associations, foundations, trade and workers unions, hospitals etc and confiscated their all assets,

with emergency decrees (with accusation of having membership of or an affiliation, link or connection with terrorist organisations or structures.)

When we think of that the dismissed 148K public servants also lost their “health insurance, pensionary rights, the rights to work & travel & education.”

Emre Turkut who is doctor of law in University of Ghent says “…the emergency measures undertaken by the Turkish authorities to date do indeed suggest that the post-coup measures have reached an unprecedented level, targeting a wide swathe of economic, social and cultural rights, and civil and political rights.”

The decrees issued under state of emergency rule threatens and permanently violate the fundamental social, economic, cultural and civil and political rights of large group of people. So, We can say without hesitation that along with the right to liberty and security, there is active threat (against large group of people) in the terms of health & human wellbeing too.

As a conclusion, there is humanitarian crisis in Turkey; if it is not treated in democratic and judicial means next phase might be genocide or civil conflict. So far, ECtHR, Council of Europe and European Union fail to compete with this crisis..

To be continued with European Union, Council of Europe and ECtHR’s attitude on Turkey’s Humanitarian Crisis.

Like Loading...
‹ The Dehumanization Continues Against State Of Emergency Decree Victims
Progressive Lawyers Association Condemned Detention Of Its 2 Members ›