By The Arrested Lawyers Initiative on 27 April 2020 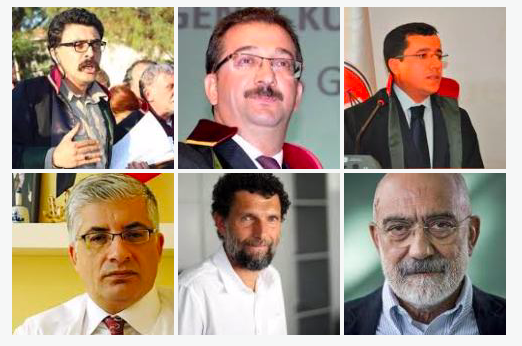 Turkey’s recent amendments to the Law on the Execution of Penalties (Law No. 5275) is severely disappointing for those who care about rights, freedoms, and believe in justice.

Impetus of the Amendment: Overcrowding

Turkey’s National Movement Party (MHP), President Erdogan’s de facto ally since 2018, insisted upon an early parole bill, but there was a serious conflict of opinion between AKP and MHP on which offenders should be included. MHP wanted to exclude political prisoners, including lawyers, journalists, human rights defenders, Kurdish politicians, while serious offenders, e.g., drug traffickers or violent criminals, are offered parole. President Erdogan consistently said, quote, “The state can be merciful in crimes committed against the state. However, it does not have the authority of amnesty in crimes against individuals.”

Turkey is one of the countries with the highest number of infections and the most rapidly expanding infection curve. While infections numbered about 2,500 on March 25th, on April 27th it was over 110,000.

Although this conflict of opinion delayed the Bill’s enactment for 2 years, the risk of the COVID19 epidemic spreading in overcrowded Turkish prisons, where inmates’ conditions are seriously unhealthy, made the Government include the amendment plan in its agenda again.

The draft Bill, which AKP and MHP have agreed, was abruptly submitted to Parliament on April 2nd, and was accepted by the subcommittee on April 4th. AKP and MHP passed the Bill on April 13th.

In this legislative period, many calls were made to the Turkish Government by national and international bar associations and human rights NGOs requesting principles of equality and no discrimination against political prisoners be observed.

On March 25th, the UN Commissioner for Human Rights, Michelle Bachelet, also called the international community, to stress: “Now, more than ever, governments should release every person detained without sufficient legal basis, including political prisoners and others detained simply for expressing critical or dissenting views.”

The European Committee for the Prevention of Torture, clearly concerned for detainees’ wellbeing, on March 20th, 2020, urged the State Parties to consider measures alternative to imprisonment, e.g., commuting sentences, early release and probation. The Committee underlined that such an approach is imperative in overcrowded situations.

The UN Subcommittee on the Prevention of Torture made calls in line with the UN Commissioner’s.

Turkey has ignored all these calls, so amendments on early parole and probation provisions are just an embodiment of injustice. According to the amendments, those convicted under Turkey’s vague and draconian anti-terror provisions are ineligible for early parole, those convicted of corruption, organized or violent crimes, and drug or sexually related offences are. The Bill also failed to provide measures to release those in pretrial detention, currently estimated at 43,000 people.

What has the amendment brought?

Before the amendment, convicted felons had to serve 2/3 of a sentence, and could benefit from supervised release 2 years before completing 2/3, e.g.,  someone sentenced to 9 years in prison had to serve 6, but could be freed at the end of the fourth year, followed by supervised release. This was not the case for those convicted under anti-terror provisions, they must serve ¾ of their sentence and can benefit from supervised release a year prior to completing ¾. So, someone sentenced to 9 years under anti-terror provisions can be freed after 5 years and 9 months (69 months).

The notorious mob leader, Alaattin Cakici, was released as soon as President Erdogan approved the amendments, while the award winning author, Ahmet Altan, hundreds of lawyers and journalists, remain in prison.

Who are those who convicted of terror-related crimes?

It may sound reasonable to exclude terrorists from such legislation, but Turkey’s persistent abuse of its anti-terror laws and the country’s ever-diminishing rule of law, mean hundreds of thousands of Turkish citizens are put behind bars, with little or no evidence of actual terrorist activity.

On December 21st, 2019, Dunja Mijatovic, Commissioner for Human Rights of COE, said “(L)aws with an overly broad definition of terrorism and membership of a criminal organisation and the judiciary’s tendency to stretch them even further is not a new problem in Turkey, as attested in numerous judgments of the European Court of Human Rights … (T)his problem has reached unprecedented levels in recent times… these proceedings, combined with a wanton use of pre-trial detention, unjustly upend many persons’ lives in Turkey, including many human rights defenders.’

Nacho Sanchez-Amor, Turkey reporter of the European Parliament, said, December 24th, 2019, “If you refer a mayor who is concerned with the problems of his citizens, students and academics who criticize the Government, a teacher at Gülen’s school in Indonesia, a journalist who criticizes the Syrian operation, and also someone who kills people by shelling mortars, altogether, with this same label; such a wide definition of terrorism would fail the test of respecting the rule of law and human rights. So, everyone is a terrorist? If you use it for anything and everyone, nothing and nobody is a terrorist at the end of the day.”

As statements of monitors of Turkey for various European institutions underline, Turkey’s anti-terrorism provisions pose real threats to Turkish citizens’ fundamental human rights. Since 2015, the ECHR, the UNHRC, the UN Working Group on Arbitrary Detention, in 13 separate decisions, have established that Turkey’s anti-terrorism provisions are at odds with international human rights treaties to which Turkey is party.

Lawyer Ebru Timtik and Aytaç Ünsal have been on hunger strike in prison for more than 100 days.

Hundreds of journalists and Kurdish politicians, over 1500 lawyers, and civil society leaders, are in prison or on bail in Turkey today for “being a member of an armed terrorist organisation” or “spreading terrorism”. The civil society leader, Osman Kavala; the former Chair of Amnesty Turkey, Taner Kilic; the former Deputy Chair of the Turkish Constitutional Court, Alparslan Altan; journalist and author, Ahmet Altan; the Chairs of provincial bar associations or lawyers’ societies, Fevzi Kayacan, Cemal Acar, Selcuk Kozagacli, Ebru Timtik Turan Canpolat; the Kurdish politicians Selahattin Demirtas, Figen Yüksekdag, are imprisoned, to mention but a few. An Arrested Lawyers Initiative survey, using the Turkish Justice Ministry’s statistics on prosecutions in the last 6 years, shows a steady increase in anti-terrorism law usage. While 8,416 people were charged for offences defined in Article 314 of the TPC (membership of an armed terrorist organisation) in 2013, this number rose to 146.731 in 2017, 115.753 in 2018. Turkish public prosecutors across the country thus charged 337,722 people for membership of an armed terrorist organisation between 2013 and 2018: 285.168 men, 52.435 women. 2019’s statistics are not yet released, but it would be unsurprising to see the figure rise to 400,000 by the end of 2019. 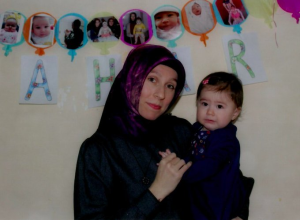 Lawyer Ozge Elif Hendekci with her baby Bahar are seen in prison in the first birthday of Bahar.

A closer look at indictments of hundreds of people imprisoned under Turkey’s draconian anti-terror laws, reveal that almost none of them were actually imprisoned for terrorist activity, including the use violence or threats. We thus confidently argue that such prisoners’ release pose no public threat.

Those discriminated against in the early parole law are not terrorists, but political prisoners. As Nacho Sanchez-Amor said, if 400,000 people, including 52,000 women, are terrorists, no one is a terrorist. For President Erdogan this Bill was a good chance to act in line with his earlier position, as statesmen do, to end political prisoners’ suffering, but Erdogan and the AKP again contradicted themselves, and abandoned political prisoners to the danger of death, possibly resulting in a political death penalty. Considering that, as the Minister of Justice confirmed, so far, 120 inmates have tested COVID19 positive in four separate prisons, this danger is not remote, imagined or simply feared but actual and imminent. Therefore, we must continue to advocate on their behalf to show they are not forsaken.

Like Loading...
‹ Factsheet on Turkey’s Criminal Justice System
Bar Associations of Ankara and Diyarbakir are under investigation for their statements denouncing Turkey’s top mufti ›